Family Time Before I go-go

I can’t believe I’m all packed up! I have come to love San Francisco to a point beyond description; it has a special place in my heart…a pretty big one actually, more like a king-size bed kind of place!

But now, I’ve made my way down south and I’m going to spend some time with the family before I head out to Lebanon. I’m really happy to be here with last few months being full of packing and organizing I didn’t have much time to come down to LA to see the family and the our newest addition, Eliana, my sister’s baby.

Today we celebrated Eliana’s arrival! The whole family got together and we had yummy Afghani food (courtesy of my brother-in-law’s mother), cake and lots of laughs. Eliana is now 2 months old and she’s so cute. My older niece, Sophia, is extremely close to her and wants to take care of her all the time. It’s super cute! 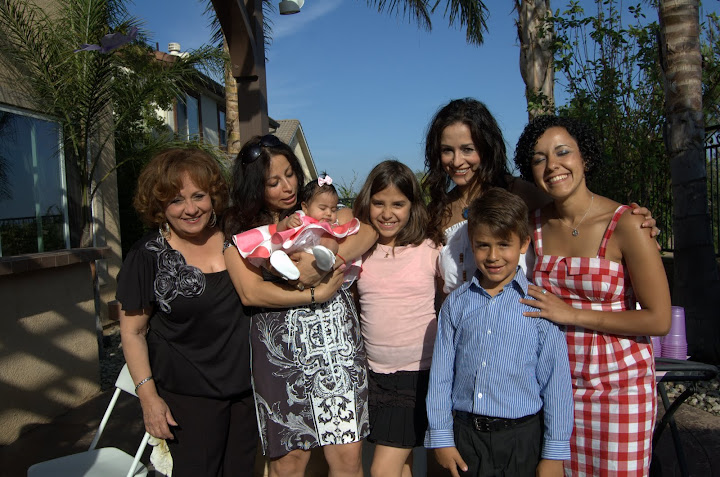 The family and I at Eliana's party

When I talk about San Francisco and the friends I have made there over the years I can’t help but smile! The Fog City has treated me with nothing but love and happiness the past 4 years and I can’t even begin to describe how sad I am to leave it.

My last days in San Francisco have been wonderful: Spending time with friends, my roommates and I threw a big pre-Bay2Breakers party at our house, there was Bay2Breakers itself with not even a drop of rain (contrary to the weather forecast) and of course lots of eating!

On Tuesday, my wonderful friends came together at Lucky 13 Bar to bid me farewell. Christine, the amazing artist, made me a wonderful poster for people to put their Bon Voyage messages for me. As the night went on the words of love and support filled the poster!

Until we meet again!

After coming back from Cairo many people in the Bay Area were eager to hear about my trip and the things I witnessed while I was there. Arabs and activists in the community were quickly organizing events and hosting talks about the “Arab Revolutions”! I was invited to speak at the Soul Sunday School ran by the School of Unity and Liberation in Oakland. Soul Sunday Schools are open political education events, in general people who attend are young organizers who do work in grassroots organizations based in communities of color and working-class communities locally.

I was extremely honored and delighted to learn that I will be speaking alongside Khalil Bendip, Meriam Ben Salah and Mohamed Talat (see short bios here). Unfortunately, Meriam was not able to join us at the last minute.

Khalil and Mohamed both arrived a little before 4:00 p.m. and we started discussing speaker order and giving each other a bit of an introduction. Slowly as it got closer to 6:00 p.m. the tiny room in an old Downtown Oakland building started filling up with young organizers from the area and a few of my good friends.

Khalil spoke first; he told the audience stories of his childhood in Algeria: the struggle for dependency, the tragic Algerian Civil War, and his thoughts about the Arab uprisings taking place all over.

Mohamed spoke next and he went through an Egypt Revolution timeline. Discussing major events and their impacts on the psyche and will power of the people.

When it was time for me to speak – I decided to tell the attendees of the stories and on the ground interactions they may not have heard of in the media. I spoke about my mother’s worries and the neighborhood watches that were organized over night after the Egyptian Interior Ministry and police decided to leave the country unguarded. I told them about how neighborhoods organized: the men would take the graveyard shifts of watching the buildings and the streets while the women would prepare snacks for them during the night and how the women and younger men would take to the streets in the morning to protest while the older men would stay behind to guide the buildings and homes. I spoke to them of the celebrations on the street the night of Mubarak’s fall. And about how everyone to the streets the next morning with brooms and paint and started cleaning and repairing the streets – it’s a sense of unity I had never experienced or witnessed in my life.

The Q&A section of the talk was great. People had interesting questions and they were extremely involved. I was glad to be a part of this event!