My “I Support Gay Marriage” Sticker in Lebanon

There’s a sticker on my laptop that reads: “I Support Gay Marriage“! I obviously brought my laptop with me here to Beirut; was that a conscious decision? Not quite – this is a sticker that I have had on my laptop for a couple of years now. My friend (a straight female friend) gave it to me at work one day.

Yes, I do support gay marriage! But who talks about gay rights in the Middle East?! To many people’s surprise, Beirut actually has a fairly active and strong LGBTQ scene. There’s a vibrant gay scene community with local clubs serving both gays and lesbians, such as Bardo and Ob La Di. Also, there are some really great local activists and groups (Helem & Meem) who are doing a ton of work on the matter, but I’m not here to talk about gays rights. However, whether I choose to or not my little sticker opens up the subject with anyone who sees it.

The first time I think the first person who saw and commented on the sticker in Lebanon was a good friend of mine. He simply looked at me gave me the thumps-up and said “I do too!” I wasn’t really surprised; he’s a social liberal. It was only a few days later that a friend of his saw the sticker and said: “Hmm…I’m OK with gays, but I don’t think they should be married and have children.” When I asked him why he thought so; he simply said “It’s not natural. A child needs a mother and father.” So, I immediately came back at him with the “what-about-people-with-single-parent” argument. He smiled and said “that’s different” and we were called to join the others for lunch and the conversation simply ended. 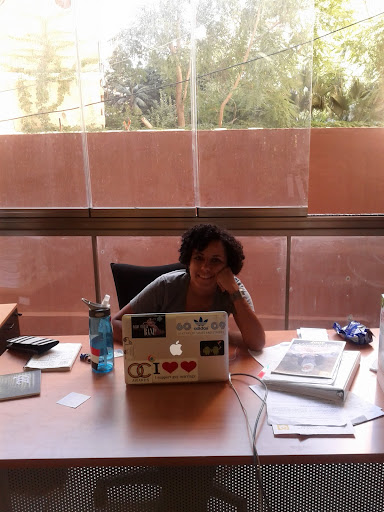 At the office at Al Majmoua with my gay sticker

Out of all these conversations, I think comments I have received at work have been the most interesting. One of the first interactions I had with one of the IT guys involved a short, but certainly awkward exchange about my sticker. He simply looked at it, pointed and said “I support gay marriage! Hmm…that’s weird.” I immediately looked at him and said “How is that weird?” The second I reacted I knew that this was very sensitive territory to be entering in my new workplace in Beirut.

Just a few days ago, a former employee came by the office and she was sitting near my desk. She looked at my laptop, looked at me, and looked at my laptop again. Then she turned around and started talking to two male colleagues who were standing nearby “Hey! Hey! Look she supports gay marriage you two can be official now.” Her tone was extremely sarcastic! The two guys laughed it off and I certainly got some attention from other employees who were in the area.

In most of these situations I’m not doing or saying anything, other than potentially provoking thought. I’m thinking even if people think I’m crazy for believing in or supporting such a cause it is still something they see everyday when they interact with me or come say hello to me at my desk.